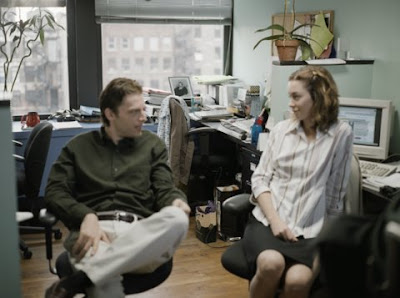 VIA CINECULTIST
I like to rate what I watch on Netflix and recently gave Flannel Pajamas two stars, which, on Netflix, is equivalent to not liking it. Did you like it?

Flannel Pajamas stars Justin Kirk (Andy of Weeds) and the pale, freckly Julianne Nicholson. A quick summary: psychologist introduces two of her patients (unethical!), so man meets woman, man and woman date, man doesn’t like her best friend or large dysfunctional family, for that matter, in part because woman is too into said large dysfunctional family. Man and woman get married, woman wants a baby, man wants one but not yet. I’ll stop there.

Nicholson’s character, Nicole, annoys me. She seems like a difficult girlfriend, then fiancé, then wife. She is selectively bothered and Stuart comes off pathetic, paying off her loans, buying their apartment, helping her start a catering business. His love for her, which he professes over and over again, isn’t believable. And the film's title comes from something in the film that seems like an afterthought, just like Nicole’s mother being a painter, Stuart being Jewish.

All in all, not a very good indie romance. Flannel Pajamas, which could also be called Dress Pants from The Limited, is available instantly on Netflix.
Posted by Unknown at 11:42 AM

this movie blew. as in chunks. do people still say that? (no. but still.)