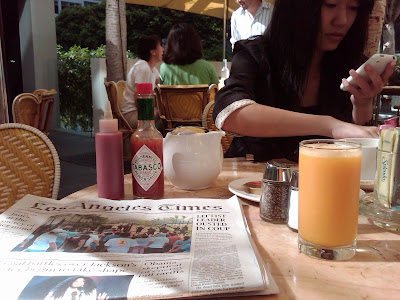 BREAKFAST AT THE STANDARD HOTEL.

Tomorrow is my one-year anniversary of working at Hometta. This time last year, prospects of working at Kiehl's and Gabellini Sheppard—and a career in New York—had sadly fallen through. A year later, though, I have to say I can't complain. Great things are happening all around me.

For those of you unfamiliar with Hometta, it's a new modern home plan company selling small modern home plans online. Architecture studios contribute plans to us, and we sell them. Builder Magazine's Jenny Sullivan explains it pretty well:

Many considered it a brilliant move when Target began selling goods by famous designers such as Michael Graves and Isaac Mizrahi, thereby bringing high design to the masses. Now a consortium of award-winning architects, designers and builders is seeking to do the same thing with house plans--minus the big box store.

Along with our Web launch (which happened just in time for our first public appearance at Dwell on Design in L.A.), we have curated a multi-city exhibition entitled Welcome Hometta to introduce the first 24 designs and the studios that designed them. The exhibitions begin here, in Houston, tomorrow night at the New World Museum with an opening reception. The event will be catered by Armandos, which means there will be a beautiful red taco truck serving free tacos and margaritas. Welcome Hometta: Houston is on view through August 2, Thursdays through Sundays, noon to 5 p.m.

Across the Atlantic, my big sister and her husband are awaiting both my arrival (in less than week) and a special arrival of their own—a baby boy. Apparently I am more emotional about this than my sister is; at the sight of her belly via Skype, I started bawling inexplicably. What will happen when I actually touch the belly? Or if I feel a kick! In any case, this time next week I will be in Brussels, probably drinking a Belgium beer.

Meanwhile, in China, my boss has adopted a beautiful new daughter. I have been religiously following my boss's wife's personal blog, as well as her contributions to Motherlode. And you should, too. I can't wait to meet Rosemary, to say the least.
Posted by Unknown at 6:15 PM No comments: